Chinese porcelains are famous throughout the world but less well known, at least in the west, are Chinese paintings.

Chinese porcelains are famous throughout the world but less well known, at least in the west, are Chinese paintings. The history of Chinese painting is long and varied, with the earliest known examples dating from the Qin dynasty around 200BC. The majority are on scrolls of fabric (bo), silk (juan) or paper painted in watercolour.

As in Renaissance Europe, artists first learned by rote, where the master shows the ‘right way’ to paint and the original ‘old masters’ were then copied by subsequent artists over the centuries. The best of these imitations are considered works of art in their own right and their painters have subsequently also become celebrated.

A good example of this is the artist Yun Shou Ping (1633-1690) whose style was based on an earlier Song Dynasty artist. Yun was one of the Six Masters of the early Qing dynasty, who early in his life, devoted himself to landscape painting, copying earlier works by the most famous artists. It was a standard practice for painters to inscribe and stamp their work, but in China collectors also customarily marked their paintings with their own personal seals and with dedications of approval and admiration. Here, apart from two of Yun's seals, there is also a seal of a 20th century collector, Chen Ren Tao (1906-1968).

It is not only ancient paintings that are highly sought after, modern and contemporary are also in high demand. There can be significant value in Chinese paintings, but due to their very nature as scrolls, they were never intended for permanent display and many in the West are rolled up for safe keeping. Painting has always been regarded as the highest form of art by the Chinese, considered the equal of poetry and philosophy. So, if you have Chinese scroll paintings languishing in a drawer and would like to have them valued, please do give our Asian Art department a ring, they may be treasure! 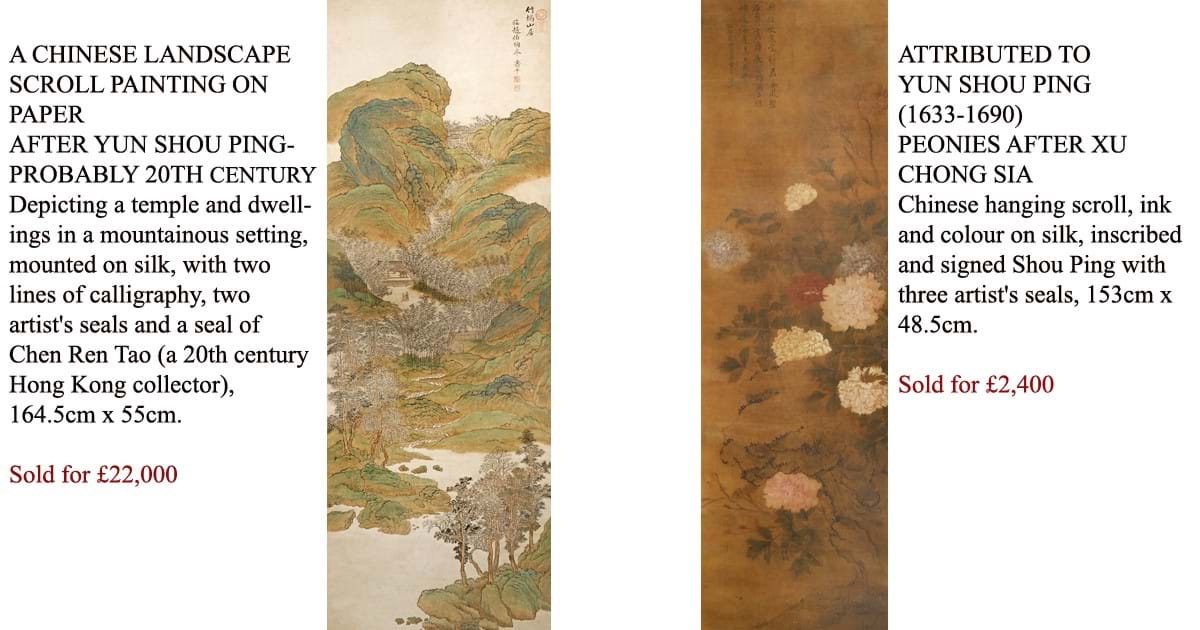