Woolley & Wallis is very pleased to offer for sale the seminal work by Yang Fei Yun on behalf of the Roddick Charitable Foundation. Anita Roddick purchased The Northern Girl from the Hefner Galleries c.1990. In this period of her life, she was busy developing the Body Shop which involved frequent trips to New York. This painting was purchased on one of these trips and has remained in the Roddick family ever since.

The Roddick Charitable Foundation is a family-run, independent and progressive organisation dedicated to the support of visionary organisations and individuals who show leadership and results in making a more just and kind world.  Over the years the foundation has helped children's education, arts and culture, medical aid and social and human rights-related charities and trusts. 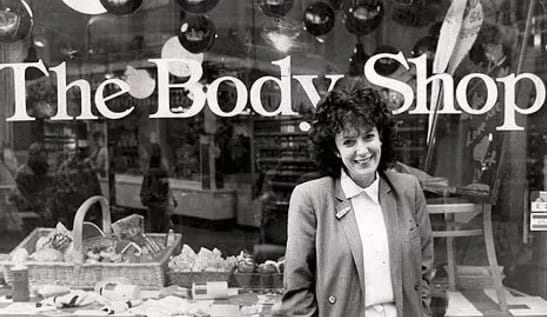 Anne Roddick outside The Body Shop

The Hefner Galleries Inc. was established by Robert A. Hefner III a businessman and collector and was based in the centre of Manhattan, New York. It specialised in contemporary oil paintings. Hefner developed an interest in Chinese oil paintings after visiting China on a business trip in 1984. After this visit, Hefner became a keen advocate of promoting Chinese art in the United States. He subsequently negotiated an agreement with the China Artist's Association to hold an exhibition in 1987 in New York which was the first exhibition of its kind in North America. The exhibition became a very important cultural exchange between China and America, so the association decided to hold regular exhibitions at the Hefner Galleries. The Northern Girl together with one hundred and fifty other paintings were exhibited in 1988. They were all sold after the exhibition to the Hefner Galleries.

Yang Fei Yun was born in Inner Mongolia in 1954 and is recognised as the master of Chinese realist figural painting. In 1982 he graduated from the Department of Oil Painting in the Central Academy of Fine Arts and in 1984 took on the role of Professor at the Academy. As a leader of the Chinese Realistic Art Movement, he pioneered a new style based on the European classical tradition. However, he didn’t discard his Chinese roots completely and his work is built on a strong foundation of Chinese culture and customs. 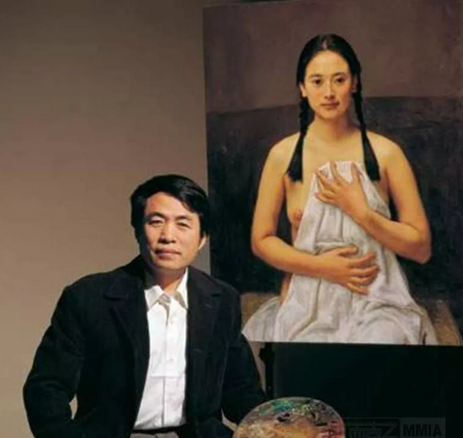 ‘The Northern Girl – love evokes the artistic inspiration of painting’

During the 1980s Yang Fei Yun embarked on a series of portraits. His subject was a girl called Peng Peng, also from Inner Mongolia. At first, she was his model, then his muse and in 1986 she became his wife. The Northern Girl is the masterpiece of this series, winning first prize at the inaugural National Oil Painting Exhibition held in Shanghai in 1987.

Ever since he saw the work of the famous Renaissance artist Leonardo da Vinci, he became fascinated with classical narrative painting and he wanted to create his own Chinese Mona Lisa. In Peng Peng he found the perfect model. She has an ethereal quality in her eyes and an elegant oriental temperament. For Yang she was the idealistic Chinese beauty. In 1986 they were married; The Northern Girl depicts Peng Peng in the early days of marriage. The portrait is painted with an almost photographic quality in the Western style but containing Chinese symbolism. It is charged with love and emotion which elevates it above Yang’s earlier portraits and takes his work to another level. The portrait is painted on a flat black ground, with red as the dominating colour. This starkness emphasises his exquisite brushwork.

Peng Peng wears a red headdress reminiscent of a Van Eyck portrait. The headdress is in fact an apron with two ties but has significance, as a newly married woman would have her veil or gaitou opened, and her red clothes refer to the Chinese marriage ceremony. She also wears a tie-dyed skirt - tie-dying is a traditional Chinese technique that can be traced to the Jin dynasty and the use of this material shows Yang’s connection to the past. The fabric was a gift from him to Peng Peng and her mother made it into a skirt which she wore when at school before they were married. Her face has a slightly anxious and shy expression with a very slight smile of excitement alluding to her recent marriage and anticipation of her life with Yang. 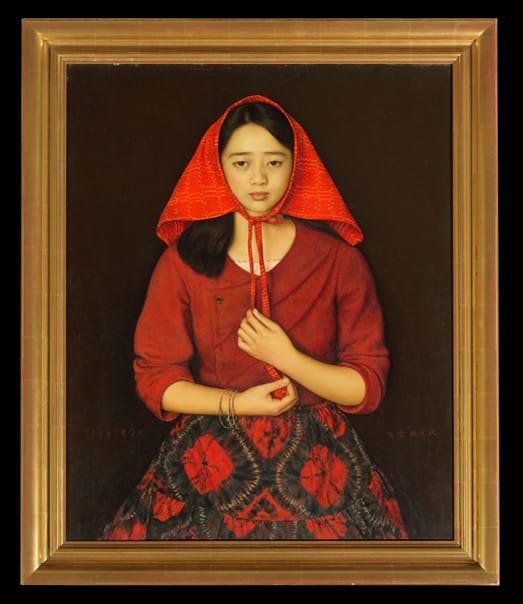 Yang believed that his art‘mostly demonstrates emotions; through the emotions, you will see the morality and kindness of human nature, fraternal love, or just one word: love. Without love we will not be alive, there will not be a universe’.

The series of narrative portraits painted by Yang of Peng Peng in the 1980s including The Northern Girl, Little Actress and The Song of Memory are inextricably linked and are like a string of memories that represent their pure and innocent love. The artist and model have an almost telepathic understanding and through their work together they want to share the beauty of their initial emotions.

The Northern Girl will be offered for sale in our November Chinese Paintings sale.  If you would like more information about the piece, please contact Freya Yuan-Richards in the Asian Art Department +44(0)1722 424589 or fyr@woolleyandwallis.co.uk.